Rotomoulding is an important plastic hollow moulding method, and should be an option in every product designer's toolkit.

Rotomoulded parts are typically hollow and can range from very small up to many meters in size. Designs can incorporate a high degree of surface complexity, so a carefully designed rotomoulded part can replace many smaller parts resulting in considerable assembly cost savings.

Plastic is the usual moulding material which has many advantageous properties for a relatively low cost. The raw material does not require purging from the manufacturing equipment so very small batch sizes are possible. In fact, it is not uncommon to select a different colour for each product made.

There is a great deal of flexibility with design and processing method which allows you to achieve some very unique parts and come up with advanced solutions. The process lends itself to creativity. We encourage you to get involved!

The raw material for the rotomoulding process can take many forms. Powdered, granular or liquid raw materials work best.

A common raw material for rotomoulders is powdered polyethylene resin due to its wide processing window. Many compounded variants are available offering specialist mechanical properties and a wide range of colours.

The key requirement for the mould is to have sufficient cavity to allow the raw material to flow. The hollow design of the mould is critical to ensure proper raw material flow to the necessary areas of the product.

If heat is the catalyst to transform the raw material (chemical catalysts can alternately be used) the mould must be made of a material that can transmit heat. Moulds are typically made from aluminium or steel, which are usually cast, machined, or fabricated.

There are two main styles of roto moulding machine:

The first is an open flame machine. The most common format is known as rock and roll, and is suitable for large round parts. The mould is firstly mounted on an axis that continuously rotates (rolls) during the processing cycle. The axis is periodically tilted so that each end alternately lowers (rocks) below bed level to ensure good raw material coverage within the mould. Heat is applied to the outside of the mould, usually by a controlled gas flame, however other heat sources can be used.

The second main style is an oven. This is essentially the same process however the mould is introduced to a heated space rather than having heat applied directly to it. This means that in addition to a standard rock and roll mechanism, a biaxial mechanism can also be used. This too has a continuously rotating major axis. However, the mould is mounted on a rotating minor axis attached to the major - gearing is generally used to factilitate this. The raw material then continuously tracks around the mould on both axes. Provided the speed ratio between the two axes is appropriate for the mould dimensions, a consistent coverage will result.

The roto moulder has a high degree of control over the moulding process, and it all starts with the preparation. Mould and machine can be set up to control wall thicknesses at various points of the product by controlling the heat permitted to and through the mould. This can be achieved by variously shielding areas of the mould, facilitating additional heat conductivity, or otherwise controlling the amount of heat directly applied to the mould surface.

Additionally, the inside surface of the mould must be treated so that the raw material sticks to it during processing, but later permit the finished plastic part to release away from the mould wall during the cooling cycle.

Usually, raw material is loaded into the hollow mould, rotation commences, then heat is applied. In practice however these steps can happen in different combinations to achieve different results.

Mould rotation is relatively slow - centrifugal force is actually not helpful. We want raw material to pool at the lowest point of the mould. Rotating the mould on two axes allows a continuous path inside the mould to travel through the powder pool at the bottom. As the mould is heated, some of the pool will start to stick or 'lay up' on the mould wall.

The raw material pool is progressively exhausted as it lays up against the mould wall, leaving behind the layer of plastic forming the final product. This is allowed to process further until the plastic properly settles or 'sinters' into a consolidated wall.

During the lay up process, further tricks and techniques can be employed. These include manipulating heat, mould rotation, and the mould itself. Additional shots of raw material can be added for multi layering effects, which can involve multiple colours, foaming agents, and different grades of plastic or materials with different properties.

At this stage the plastic is still quite viscous, so the mould will be allowed to continue rotating as it cools and the plastic sets. There are various cooling techniques, ranging from a controlled ambient temperature through to more aggressive methods. During the cooling cycle the plastic part releases away from the mould which allows it to be later removed by the roto moulder for fitting and finishing.

The outside surface of the plastic part takes the shape of the inside of the mould. The inside surface however is free formed and smooth. The free flowing raw material has not been subject to any physical stresses or 'shear' during the process, which is a feature of this moulding method. Allowing the plastic to settle in this natural way ensures a very strong but flexible knitted molecular bond. The result is a very durable product with advanced mechanical properties.

What to do now?

In practice there are many tips and tricks a skilled rotomoulder can apply to achieve some amazing results. We suggest becoming acquainted with practical rotary moulding method to understand what is achievable with this process, and to spend some time with your rotomoulder to explore your options.

Most importantly, we highly recommend involving your rotomoulder early in your product design process to ensure that all the advantages available to you are employed from the ground up. This will ensure your mould is made 'roto moulding friendly' and can incorporate all of the special design features that this process allows you. 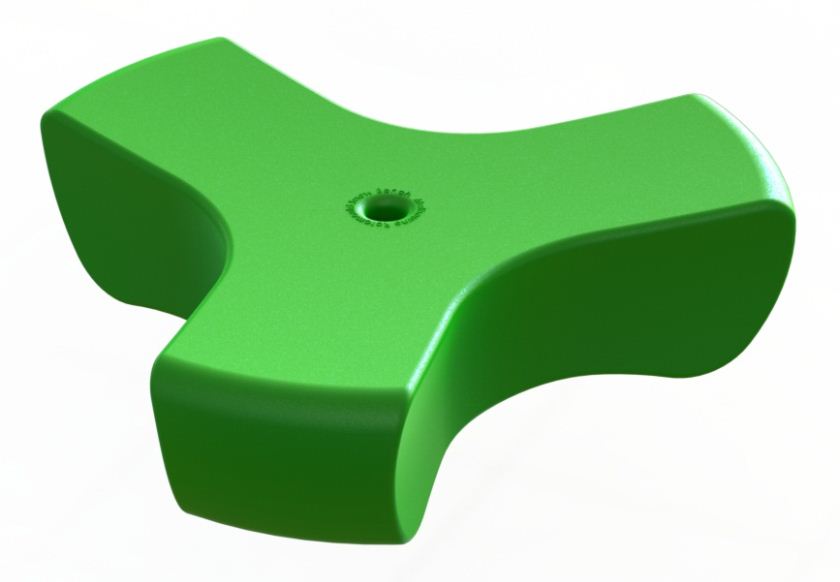